This weekend hundreds of colleagues took part in a charity dragonboat race at Salford Quays, as part of Co-op Insurance’s 150th birthday celebrations.

The 31 teams, each made up of a skipper, a drummer, a steersman and rowers, were cheered on by thousands of spectators, who stayed to enjoy a day of family fun, including food stalls, a magician and giant outdoor games.

Each of the 31 boats that took part was racing to raise money for an individual charity including; We Love Manchester, Greater Together Manchester and Alder Hey Children’s Hospital. The money raised from the family fun day that followed, will go to Co-op Insurance’s official charity partner, the Eden Rivers Trust. It will go towards flood management measures in Cumbria, an area identified by Co-op Insurance as one of the worst hit areas of flooding. 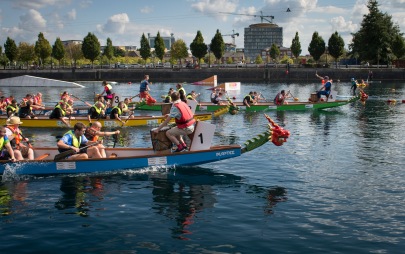 The winning team was the ‘GI Dragonboat Team’ (who would not have won the award for most inventive team name!), but beat 30 other teams to take the top spot – and raise money for Central Manchester University Hospitals NHS Foundation Trust.

The team members, all from Insurance’s ‘product, pricing and propositions’ team were:

Best dressed and most money raised

Another shout out goes to Helen Chan’s team, ‘Captain Spearing and the Co-operators’ made up of Co-op Insurance marketing and digital folks. They won the ‘best dressed’ award, judged by Co-op News for their bee ensembles – a nod to the Manchester Bee symbol. Helen’s team also won the award for most money raised, which was £2935.05 for their charity Marie Curie.

Well done to all colleagues who took part and raised money for their chosen charities.