From island shores to city streets, our stores are at the heart of their communities

How we do that is different every time, and no two new stores are ever the same. Here are a few things we consider when deciding where to open a new Co-op:

We want to be as close to as many potential customers as possible, so a great location is important. We want our stores to be in a convenient spot, visible from the road or in a high footfall area and often close to schools, transport hubs or other shops. We analyse lots of data to help us decide on the best locations for our stores.

Someone in central London will be looking for something different from a convenience store than someone, say, in rural Scotland. That’s because what our customers need from us depends on several different factors including the time of day, location and what they’re shopping for. City centre stores, for example, will stock a good selection of sandwiches and ready meals with a lot of self-scan tills for people who want to get in and out in a hurry.

Whether it’s stocking 100% British fresh meat, using compostable carrier bags or supporting local causes, we do the things that matter most to local communities.

Here’s an example of how two of our newest stores – Cromwell Road’s Co-op in the Scottish Outer Hebrides and America Square’s Co-op in central London – serve very different communities.

About the shop: The store is in an old railway arch, close to the Tower of London. At around 1,200 sq ft, or less than half a tennis court, it’s much smaller than our average store. It’s the second of the latest ‘on the go’ format stores we’ve opened so far, after Piccadilly Station’s Co-op in Manchester.

About the customers There are around 6,000 people working in offices nearby. The store is on a main road between two busy areas, so gets lots of passing trade, and is close to Tower Hill and Tower Gateway stations, which are used by over 500,000 people a week.

How it meets people’s needs: It mainly caters for busy people who are looking for something quick and tasty to eat, either straight away or later the same day. There’s coffee, fruit and pastries for bleary-eyed commuters in the morning and a wide selection of sandwiches, salads and snacks for lunch. For dinner, the range includes ready meals and prepared foods for those who want to cook, but don’t want to cook completely from scratch. 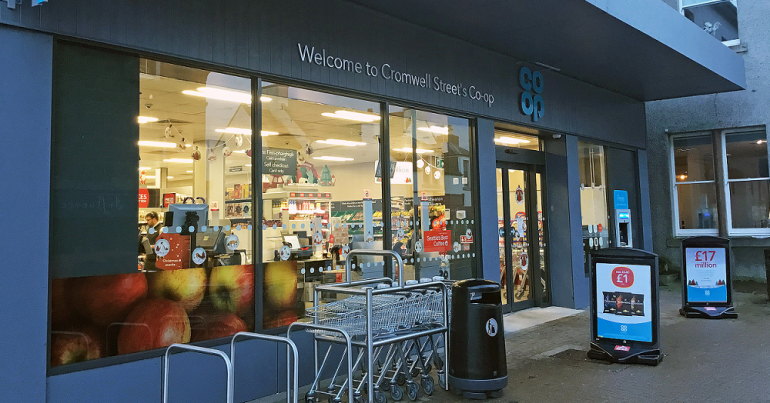 About the shop: In the middle of Stornoway, the biggest settlement on the Isle of Lewis and Harris in the Outer Hebrides. It’s close to the port, other shops and restaurants. At 3,500 sq ft, or around one and quarter tennis courts, it’s a bit bigger than the average Co-op.

About the customers: There are around 2,000 people living nearby, but the store will also serve residents visiting from the rest of the island and holidaymakers in the summer.

How it meets people’s needs:  As it serves a residential population, it has everything you need for that day and the next couple of days. There’s every day staples, including lots of fresh vegetables and meat so people can cook dinner from scratch. There’s also frozen food and bread made by a local bakery on the island. Tourists are catered for with a seasonal range and locally-made whisky and gin, perfect for presents.

Do what matters most, Food, Property

After almost a year living with social distancing measures, we asked members to tell us again how they were feeling and to share what they’ve been doing to stay as well as possible over the past 12 months.Here’s what they said.

The best seasonal produce to eat in spring

Spring means lighter days, warmer walks and, most importantly, lots of new fruit and veg to enjoy! So, what’s best on the menu right now?

Here’s our top breakfast and brunch recipes to treat mum this Mother’s Day.